History of the Diamondback

In 1909 at the top of Grassy Mountain North Carolina, Supreme Court Justice Heriot Clarkson established the "Switzerland Company" on 1,100 acres. He made the rules and they included no alcohol and one house per lot. Plenty has changed in a century.

Oddly enough, the "Company" opposed construction of the Blue Ridge Parkway and actually filed suit. The Parkway was taking 800 feet of right-of-way through the resort at what the owners considered too low a price. After the court set a price of $575 an acre the Parkway settled on a less expensive 200 foot right-of-way and paid $25,000. This section of the Blue Ridge Parkway is the narrowest point in North Carolina.

Another legal matter surfaced when advertising signs were placed on the parkway at the entrance to Kilmichael Tower. The National Park Service ended-up bulldozing the entrance.

The property became the Switzerland Inn. The original inn was torn down and rebuilt in the 1960s. Several different owners have operated the inn since the 1960s. 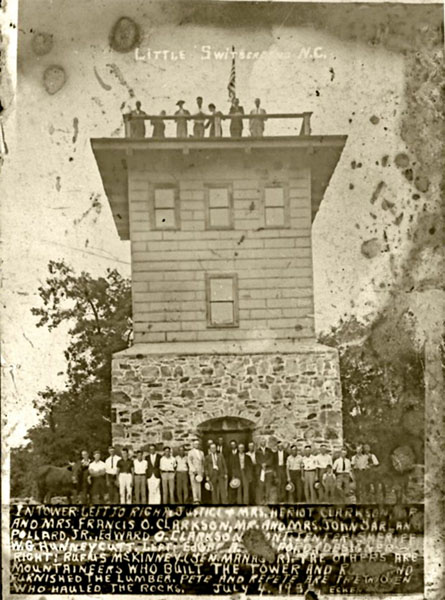 Construction on the Blue Ridge Parkway began in 1935 near the Virginia/North Carolina state line. The proposed highway would link the Shenandoah National Park to the Great Smoky Mountain National Park. Completed in 1983 the major undertaking actually reached its goal.
The path of the Parkway was originally supposed to veer to the west at Linville, pass Roan Mountain into Tennessee. Then turn southerly passing Unicoi and Gatlinburg. Asheville business owners lobbied heavily for the present North Carolina route and won.

Today this continuous 469 miles of asphalt provides a variety of spectacular scenic views from misty mountain tops to pastoral valleys; and not a traffic light to slow your travel. It is more than just a road. Wide boundaries on each side of the highway have preserved not only the flora and the fauna, but the pioneer culture and life style as well.

It is not a highway to make great travel times, but a place to slow down and take in the beauty of nature. There is something to see around every corner and many pull-offs for photos or picnics. A number of historical exhibits are along the route. Take your time to get the most from this journey.